Many cities have considered building wireless mesh networks to connect broad geographic areas to the internet. These networks improve emergency services and provide valuable internet access to people who might not otherwise be able to afford it. But police could also use them to track the location of wireless phones and computers.

Embed this item [get code]

What is it used for?:

With the spread of consumer Wi-Fi technology, many cities across the country have begun to explore the idea of installing citywide wireless “mesh” networks. These networks connect wireless devices across an expansive geographic area seamlessly. For cities, a mesh network offers two major benefits. First, it improves the local emergency communications system. In the event of a natural disaster or major accident, existing communications systems may be damaged or overloaded. A mesh network provides a parallel system that responders can use in such a situation. Second, it provides convenient internet access to the public, including some people who may not be able to afford it on their own. But as a device connects to the various access points (or “nodes”) that comprise the network, its location can be recorded in the network’s logs. This means that network administrators could easily to track the location of cellphones, tablets, laptops – anything with a wireless card. In addition, governments could also conceivably monitor the traffic taking place on the network, using deep packet inspection or similar methods of surveillance.

Police technicians can easily configure the network to collect very sensitive information about people’s movements. Over time, for instance, police could use this data to build a historical map of your movements within the network. It might cover the course of a day, a week, a month, or any amount of time an investigator would like to see. Conversely, the mesh node data could identify all the cellphones that were within a certain area at a certain time. For example, police might use it to build a list of people who attended a protest or shopped at a particular store on a particular day. Since tracking the movements of individuals reveals an extraordinary amount of information about their habits, livelihoods, relationships, and values, elected officials should establish strict rules to protect the privacy of people walking down the street. The government shouldn’t collect such information without probable cause of criminal activity and judicial oversight.

Most of us are familiar with Wi-Fi internet connections – you plug your modem into a wireless router, which establishes connections to your computer, phone, or tablet. In your home Wi-Fi network, if your router stops working, the entire network goes down. 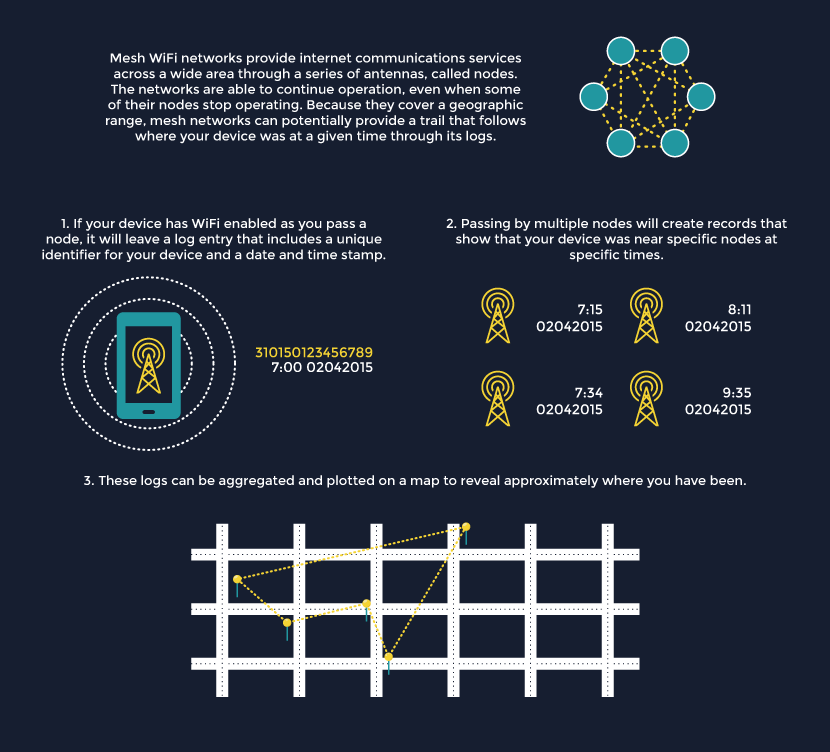 How prevalent is it?:

While many cities have considered building wireless mesh networks, most projects remain in the planning stages.  Setting up a mesh network for location tracking is relatively easy to do. However, the ACLU’s investigation of this technology shows that a city must make a proactive decision to use the network for that purpose.

When government agencies consider acquiring and using surveillance systems, communities and their elected officials must both weigh the benefits against the costs to civil liberties and carefully craft policies and procedures that help to limit the negative effects that surveillance will have on fundamental rights.  For a useful list of considerations, please visit the recommendations page.